Welcome to Dermatec International ::: TRAINING FOR PERMANENT MAKEUP AND SKINCARE

The founder of DermaTec International™, Inc., became a practitioner of Permanent Cosmetics in 1970, and started “teaching” Permanent and Reconstructive Cosmetics, in Europe, Asia, the Middle East, and Africa in 1979. She felt that the first 9 years in the industry, did not qualify her to teach. Even during the time while she was still a Medical Student, she worked and taught the Permanent Cosmetic industry. In the early to mid 1980’s, she came to help teach, for the original school established in the United States, and taught together with Susan Church, Elizabeth Finch-Howell, and Patty Pavlik, during classes for Perma-Derm Academy in Las Vegas, Nevada.

In 1989, she set up her own school in the United States, under the name "Derma-Medics", but continued teaching Worldwide, which she still does today. The name DermaTec International™, Inc. was not established until 1990, finally incorporated in 1999, and later the name was trademarked, thru the United States Patent and Trademark Office in Washington, D.C.

Since its inception, DermaTec International™, Inc. has been dedicated to, research, education, design and development, formulation, as well as production of equipment and products, for the Permanent Cosmetics, Cosmetic Surgery, Skin Care, Body Care, Laser and IPL industries.

DermaTec International™, Inc., its founder, engineers, and chemists, are continuously involved in Worldwide Research; in order to be able to, thru our time, worldwide travel, diligent research and study, always bring the latest technology and knowledge, back to our students and customers. 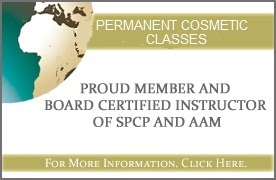